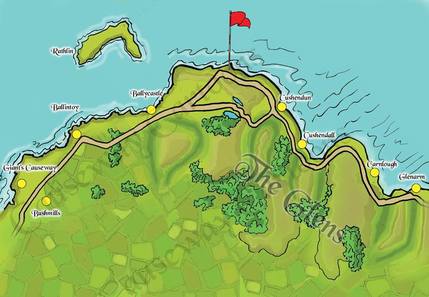 It's a pleasure to illustrate maps for my country 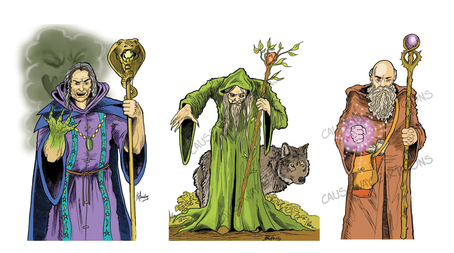 I recently illustrated board game characters for a man named David Hopkins in California for his new board game Fate of the Dragon. We went for a Dungeons and Dragons/ Lord of the Rings kind of look. What a trip! 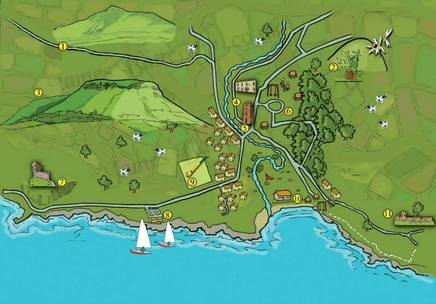 Illustrated map designed for tourists in Cushendall. You see a lot of generic maps throughout the country but i've always been influenced by Tolkien's maps in his Hobbit/Lord of the Rings/Silmarillion series and i've been interested in the old fashioned discovery maps of the Americas back in the 1400's -1500's. I like to think that this is where my maps differ. My maps are all illustrated by hand. 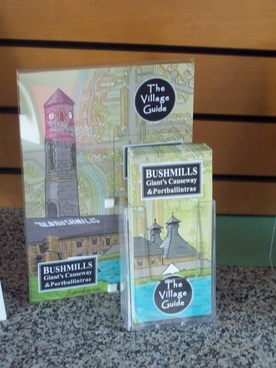 
Created alongside the Brighter Bushmills group, "The Village Guide" gives tourists a fresh new look at the village/town of Bushmills using my illustrations to show the map of the main areas of interest in town. The brochure also includes a history of the town with photographs, and a layout of all the commercial interests in the area. 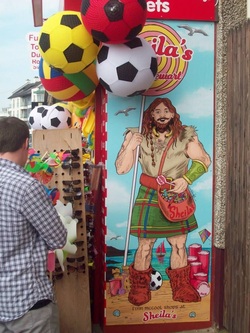 
John, owner of Sheila's sweetshop in Portstewart wanted a kind of life size sign of Finn McCool for the side of his shop as a novelty for tourists and children (both young and old) to take pictures with. John was already familiar with my Finn McCool illustrations having regularly purchased my Giant's Causeway/Finn McCool themed postcards and keyrings. John and i worked on the project via phone and email, with John giving me an outline of exactly what he wanted to see illustrated. The result was a very detailed very colourful artwork which was then printed on Dibond by Sign-it in Coleraine. 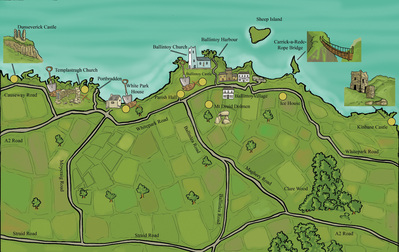 
Map created for a website for the Ballintoy archaeoligical society of the North Antrim Coast between Dunseverick Castle and Kinbane Castle, with the dig sites at White Park House, Ballintoy Castle and Templastragh 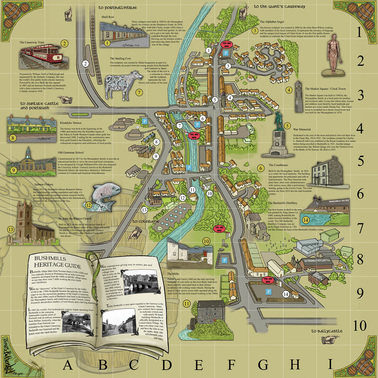 A major work of achievement, the Bushmills map which will be included in the brochures and outdoor panels is a fine example of the range of work that Battersby creates. A combination of geography and map work combined with accurate illustration brings to life a Bushmills tourism experience unique to the area. Highly detailed and beautifully colored, the map boasts a plentiful array of known landmarks illustrated and colored in James' own style. Currently a work in progress.

Mr Bigmoney had it all: a beautiful mansion, fast cars, and a thriving business where his every desire was met. One thing he didn't have however was a heart: As his logging business destroys the lives of both animals and people, Mr Bigmoney is unconcerned about the sadness he causes to those who live in the forest. When Mr Bigmoney goes to sleep one night, his whole world changes as he wakes up to find he is a little bird...trapped in the same forest he has carelessly destroyed.

While Mr Bigmoney is a fictional story and aimed at children who have empathy towards living things, it has a nice coating of satire aimed at the corporate world in general.

Space Peppers tells the story of a young Mexican boy who meets some burrito loving aliens while out tending his father's jalapeno peppers. The aliens ask the little boy if he'd kindly visit their home planet to teach them how to look after their own dying crop. A heartwarming and quirky tale for the younger reader

Written and Illustrated by James Battersby
Space Peppers is a work in progress. 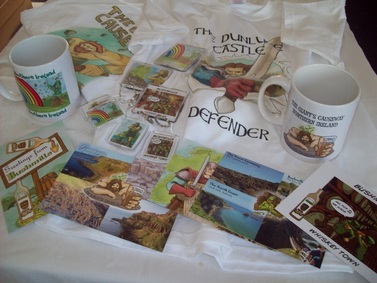 Souvenirs created for my co-owned souvenir business in Northern Ireland. Dozens of all new images were created including the well known mythologies of Finn McCool and the Children of Lir. Products for sale include Jigsaw puzzles, mugs and postcards 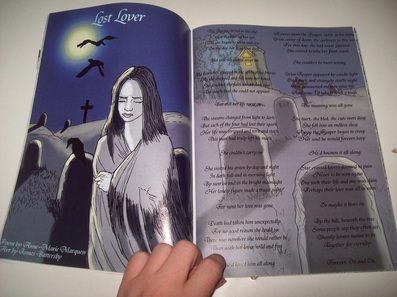 Poetry by Anne-Marie Marquess
With Illustrations by James Battersby

Run Run Catch Me If You Can

Run Run catch me if you can is the story of a little boy called CF, who always seems to get into trouble. CF suffers from ODD (Oppositional Defiant Disorder) and seems to be a lost cause until his beloved Grandmother takes him under her wing and gives him strict rules to live by. Soon CF learns to behave and to appreciate everything that is done for him.